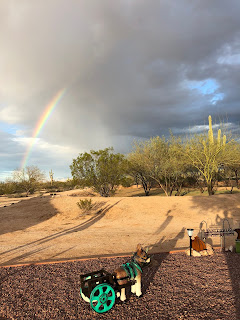 February has come and gone and life in the desert has been good.

Some things that we have done during the month is a weekly Taco Tuesday with some of our friends here in the park.
There are weeks we will have from 10 to 16 people, and then some weeks we have 4.

It doesn’t matter how many show up as we have a blast with whoever participates.

Our waitress Charli, which actually works at the park along with her husband, has a second job at LB’s Cantina and has become our "go to" waitress have decided to quit their job at the park and move on, so we will miss our Charli on our Tuesday taco runs. 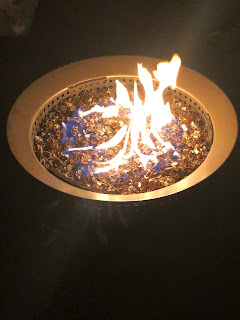 We have purchased glass and replaced the lava rock in our fire pit.
Thanks for the great info Carol.
I love the way the fire dances in the reflections of the glass. 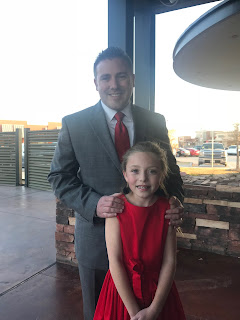 Back in Oklahoma, our son and grand daughter went to the Daddy Daughter Dance.
As I look back at the previous years of pics, our sweet Cooper is sure growing up.
Such a beautiful child.. 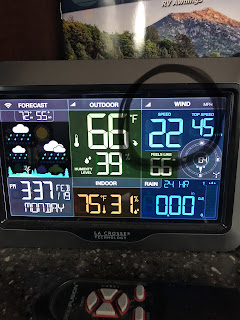 We have had a couple of very windy days.
The wind gust have been to 45mph during one of the storms.
A much needed rain helped to give the desert an over due sip of water.
The weather center showed we got .72" after all was said and done.
It was the dirtiest rain I had ever seen.
Everything was covered with dirt!
We will take what we can get as it has really been a dry season.

We had another day that the winds got up to 25mph.
It came from a different direction than the earlier event, and the dust was really whipping up around us.
We did actually get a small amount of rain (.27") and it was clean this time, so it kinda washed the trailer a little.
By the way, we are enjoying the new Weather station that Chuck set up. 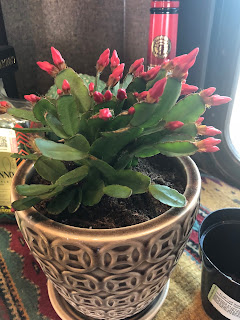 I bought a couple Easter Cactus while at Walmart.
They look so much like Christmas Cactus but they bloom in the Spring, hence Easter Cactus.
Love the red color...it’s a nice addition to the interior.
Here is a link if you are interested to learn more.
Easter Cactus info 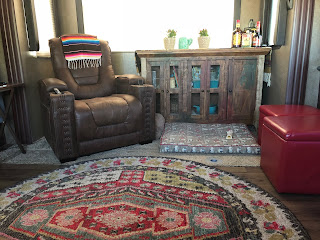 You know those adds that are always on Facebook....
Well, one got my eye and I purchased an area rug for the living area.
The reasoning behind it is to catch some of the dust that we track in on our shoes...
I know we could remove our shoes and help the situation a whole lot more, but we just aren’t those type people.
I love the added bit of color in the living area. 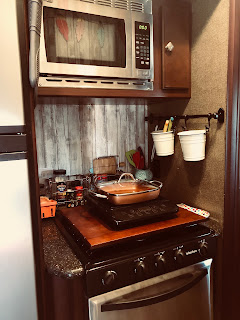 The latest change was having Chuck to remove the vent hood that is over the stove.
Gosh, I had no idea how that could open up a space.
It was just too close to work under.
We have a MaxxAir Fan in the kitchen that can pull out the heat and smells if needed when I cook.
I am not using the propane stove top or even the oven.
We generally cook outside or I use the induction cook top to fix our meals.
Between those choices and the crock pot, I can fix about anything.  :) 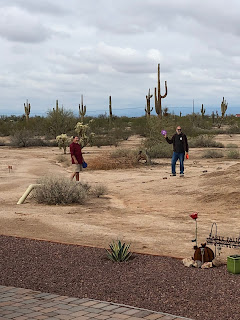 The guys have been busy with their Disc Golf.
Jerry has set up a Disc Golf Course in the park for any interested parties to play.

Behind our rig is a nice wide open area they are calling the "driving range".....LOL
Works out well until one of them gets their disc to fly correctly and it hits one of the neighbors trailers....oops!
Thank goodness we have some really nice neighbors that are very understanding!

The 4 guys, Jerry, Chuck, Ryyan, and Steve have been playing it quite a bit.
They have also gone to another course and played in the Mesa area.
I think they are hooked!

It’s been a bit cooler in February and has kept us inside after the sun goes down, so we are looking forward to warmer days and nights in March.
Amazing that in a little over a month we will packing up and head back to Oklahoma.


Jerrry & Konni went out Jeepin one morning and brought me back a great piece of Saguaro.
I cleaned it up and we have placed it in our "yard"....have even stuck a light down in it for a nice look in the evening.
You just don't understand this until you live and stay in the desert....LOL
Its an acquired taste of style. 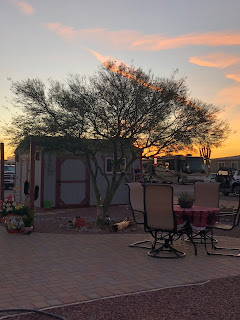 Sunsets have been their usual beauties and we have even gotten a few rainbows along the way. 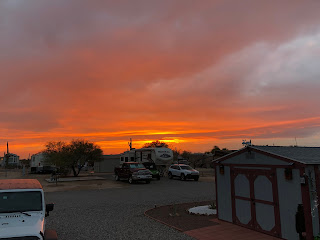 I close this February 28th with a pain in my back, but this to shall pass....so unusual for me to be down but it happens sometimes.
I think it is because I have been lifting the pot of snapdragons in and out of the shed to keep them from freezing during the cooler than usual nights.

The month of March is upon us and the weather is supposed to be great.....here’s to March...bring it on. :)


Posted by Diane Higdon at 9:30 PM No comments: Links to this post